A sunny weekend in Devon… Not

If there was a weekend which could be used to test out camping gear in “extreme” conditions, this past weekend was definitely a good one to pick. Tristan and I are pretty good at picking these weekends for camping trips if you look at our past experiences. We haven’t really had much luck with biking and camping â€“ camping gear was stolen in Vegas on our trip round trip from/to LA via Colorado (it snowed anyway so that was a bonus in disguise); we finished a weekend trip to Wales early as it was persisting down; and most nights we stayed in a tent on our Scotland trip involved some precipitation from the sky (but that is Scotland for you apparently). Still, I like to think we are rugged men, able to adapt to all circumstances â€“ even if adapting involves spending the night in a hotel or backpackers.

The plan was to head down into Devon and Cornwall for a long weekend and test out our camping gear in preparation for the Scandinavian trip. The weather leading up to the weekend had been pretty good; a bit chilly but with some lovely, much missed sunshine. A couple of days before it all went down hill with some heavy showers and strong winds. There was a bit of a lull the day before we left, and even the morning of was pretty good. Our luck was with us when we stopped in at some services around Exeter for a cup of hot choccy and a wee break. Just as we were heading out to start again the weather gods decided our sacrifices of beer earlier in the week were not enough and so down came the rain.

We had picked Ashbourne Woods camping siteÂ to spend the weekend and we were both quite impressed when we turned up. The facilities were quite basic but then we were camping and so I don’t think people should expect all life’s little luxuries. Still the showers were hot, the toilets had toilet paper and all water from the taps was drinkable, so what more could you ask for. The campsite was really nice â€“ it was on a hill covered in trees (planted by Lister the owner), with camping between the trees or out in a small field. For the less hardy there were small heated wooden huts to stay in. We had a slight reprieve from the weather when we were putting up our tents, but only slight. From that point on it consistently rained all through the night. Tristan had grand plans to test all three of the camp stoves that he’d brought â€“ yes, he had three â€“ but as soon as we put our tents up we looked at each other and almost in unison said, “Pub?”

The camp site we were staying in was just outside of a small village called Rattery and it was a short walk through a field, between some trees, down some narrow lanes, and around a corner, then up a hill to the local pub â€“ The Church House Inn. There was a little bit of a “walking into the Slaughtered Lamb” moment but that was soon overcome when the beers started flowing. The locals all seemed nice when they got talking â€“ except for the guy on his own at the bar reading the paper who didn’t engage with anyone â€“ and gave us some advice on what to eat from the menu. Apparently any of the fish dishes were to be avoided, and the steakâ€¦ and the chickenâ€¦ and nobody eats vegetarian food. That limited us to about 56 items from the extensive, inspired by Witherspoons menu. Still, the beers were very tasty as was the compulsory end of night Jameson. The walk back to the camp ground took us slightly longer than usual as we missed the gate to the back entrance of the campground. It was dark and had nothing to do with our slightly inebriated state.

It was a great night to test out our tents â€“ we had strong winds and rain all through the night. My compact Nordisk Telemark 2 tent lived up to my expectations in that it didn’t collapse on me during the night. It also didn’t leak so that was also a bonus. For a two man tent though there isn’t really much room for anything more than me in it though â€“ it’s quite compact. I think I’m going to have to figure out something else for where to store all my gear as I couldn’t even get a cat in there with me let alone try swinging it. I was also testing out a recent purchase of aÂ Thermarest LuxuryLite UltraLite CotÂ as sleeping on the hard ground isn’t fun. Luckily I had put up the tent and cot the night before (when it wan’t raining) so discovered that I basically had to construct the cot in the tent otherwise I couldn’t get it in. It is still a bit tricky doing that as you construct the cot upside down and then have to turn it over. Turning it gets me slightly worried as it pushes heavily against the edges of the tent so I worry about ripping it. But it was really comfortable to sleep on, with the only problem being that I need to have either a blanket beneath me or be completely wrapped up in my sleeping bag in order to not be cold. While it was comfortable I noticed when I took the cot down a couple of the supporting bars had bent. I’m not sure I’m happy about that so I’m cogitating on whether to return it.

The next day was more rain and wind, so after a hearty breakfast at the local farm shop and cafÃ© (best breakfast in the area apparently â€“ it was OK), we made the decision to basically start heading back to London. We sort of kind of picked ish Wareham as a stop off for the night as by the time we had packed up all our gear it was about 1:30PM. Three to four hours riding seemed like enough for the day anyway. With a short stop off in Beer (love that name) for a cup of tea, we eventually ended up in Weymouth, picking a local hostel, The Bunkhouse Plus, to stay in. We were greeted by James, a volunteer who looks after the hostel every so often. James is a wee bit eccentric but was nice enough and the room we shared was pretty cheap (Â£19). I’m sure exciting things happen in Wareham but we didn’t manage to come across anything so went to bed pretty early. Not sleeping much the night before due to wind, rain and cold, plus the long 3-4 hour ride took it’s toll. Perhaps I’m just finding excuses. Apparently nobody goes out in Wareham until 11PM.

SundayÂ was quite eventful from one point of view. We stopped in Corfe for a bacon butty (that’s a sandwich for those from outside of the UK), and a sausage roll, and a yummy sweet thingâ€¦ and a hot drink, and I guess to admire the castle (it’s quite impressive). After avoiding a donkey (t’s was Palm Sunday) we parked out bikes, got some food and hung out in the “square” filling our bellies with goodness from the local bakery. As we were eating a dude walked passed and mumbled something about what bikes we ride â€“ apparently Triumphs are better than Honda’s in his opinion (Nick – 1, Tris – 0). Terry (dude’s name) was quite (very) chatty and despite insinuating that we had to go several times, the conversation went on for at least 10 minutes, if not longer. But Terry was a nice guy and interesting, running a replica gun war games thingy in the local area (BB guns that is). He’s ex military so was quite passionate about it and making it as real as he could. Very nicely he’s offered us some free gun hire if get back in contact with him for a war game session.Â  We also stopped in Petworth for a short break and ended up having a long conversation with a Swedish woman who lives locally with her daughter. Turns out she teaches people how to shoot guns so has invited us back for a session with her and her shotguns. She also invited us to stay with her “crazy but clever” 21 year old sister in Sweden, and with her mother who lives in a “dead town” but makes some really nice cakes. I like cakes. Might just take her up on that.

So it was a good weekend in that we went biking, did a bit of camping, road some nice roads, met some interesting people and didn’t die. It was also disappointing though as we didn’t really test our all the gears (dam you rain). Still, there is plenty more time before Scandinavia next year so I’m sure we’ll be out another time in the hope of getting some camp cooking going. We learnt a few things though so that’s got to be a good thing.

I’m going to leave you with a video of some mountain bikers when brought out their guitars and just started singing together while we had our hot drinks at the local team rooms in Corfe. I don’t quite understand how mountain biking and carrying a guitar on your back work successfully but then perhaps I’m just not good enough on a mountain bike. 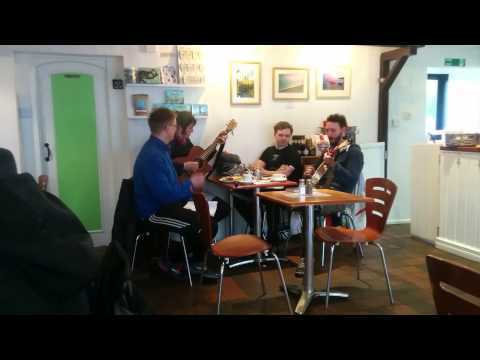